The project is led by Devapriya Chattopadhyay (IISER Pune, Department of Earth and Climate Science)

and Aleksandra Skawina (University of Warsaw)

Biotic interaction plays an important role in the evolution of groups through time. 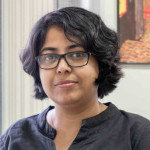 The biotic interaction plays an important role in the evolution of groups through time. Organism-level associations or characteristic traces are the only direct evidence of biotic interactions in deep time. The available databases of fossil occurrences do not allow interaction data to be fully registered or exploited. Such data are reported in a non-standardized way for different organismal groups and time-slices, further limiting such databases to reach their full potential.

Objectives – A collaborative initiative to develop a standardized database is needed to close this existing gap. We plan to involve an international collaboration of researchers, institutions and paleontological communities from around the world to design and contribute to this database. The primary objective of the planned workshops is to develop a standardized way to report ancient biotic interactions, including the protocols to collect, evaluate and share such data, and systematically tabulate the available interaction data sheets, which can be merged into a new database structure. Such a database will allow researchers to quantitatively evaluate the relative role of abiotic and biotic drivers of evolution through time. It will also contribute to conservation efforts by predicting future chances in biotic interactions in relationship with diversity and climatic fluctuations based on a reliable deep-time record of biotic interaction.